EDINBURGH CND EVENTS:
1. Thursday 11th May Edinburgh World Justice Festival ‘building’ meeting 7.30pm at Augustine Church Edinburgh EH1 1EL -Help plan the 2017 Edinburgh World Justice Festival, come to a meeting where you can contribute your ideas and get involved: Date: Thursday 11 May Time: 7.30pm-9pm Facebook event: https://www.facebook.com/ events/1484424191609452/
Edinburgh CND has been involved with the EWJF since its inception and we hope to continue this year. Do come along if you would like to input.
2. Saturday 13th May: Leafleting 1230 East end of Princes Street
3. Wednesday 17th May: Special ECND meeting on the Global Ban talks (and the election!) 7.30pm at the Peace and Justice Centre. This will be followed by a meeting the next day in Glasgow:An invitation you cannot resist! Can we tell Scotland about the Nuclear Weapons Ban Treaty this June? Come to a meeting in the SCND Office, G12 8LE  on Thursday 18th May at 7.00pm to find out what you could do.
We have a new ‘election special’ of our green card. These are designed by Fiona Menzies who we can recommend! 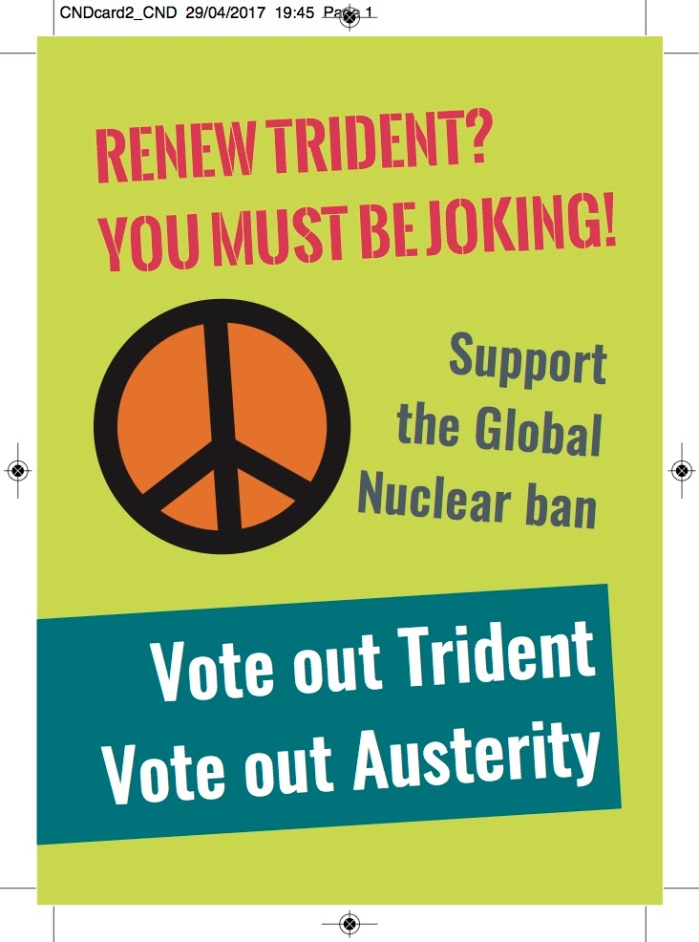 THE GENERAL ELECTION
Scottish CND General Election Statement: Complacency about nuclear risks is now turning to concern among voters who had come to believe that nuclear weapons were history. This General Election is an opportunity to look critically at the policies of the parties seeking our votes.
Scotland will be the number one target in Europe outside of Russia if we are dragged into a war. The Faslane base, just 30 miles from Glasgow, has the biggest concentration of nuclear firepower. With Trump in control of the US arsenal, we are in a period of great uncertainty. Scotland’s best defence is to be known for its peace and disarmament work. Instead, with Trident, we are known as the place where the British state keeps its nuclear bombs so that it can pose as a big power.
The British Conservative Government recently announced that it would be prepared to make a ‘pre-emptive’ strike and use the Trident bombs to launch an attack first, killing millions of civilians. That support for first – use creates a frightening breeding ground for mistrust and miscalculation. Don’t let Scotland be part of this. Use your vote wisely.

UK CND adds: It is vital that every candidate knows that where they stand on nukes makes a difference to how we vote.
Today we are launching our General Election Database to support that work. We want every candidate to be contacted many times during the campaign. None of them must think that nuclear is just a side-issue. With your help we are gathering and sharing information about the views of candidates standing in all 650 constituencies. In this way we can help voters to make the best choice to #VoteOutNukes at this important election. cnduk.org/Election2017
You can view the database by visiting our http://www.cnduk.org/component/k2/item/2727 This is very much a work in progress and we need your help us collect candidates’ positions for us to share.
CND is urging members and supporters to contact their parliamentary candidates, asking them to make three commitments ahead of the election:
To support UK signing the UN nuclear weapons ban treaty
To oppose the replacement of Trident
To oppose the construction of new nuclear power stations
We have written a model letter to help you when contacting candidates. Please send any responses you receive to parliamentary@cnduk.org or telephone 020 7700 2393 to ensure that our records are up to date. Please also contact us if we have missed candidates standing in your constituency.
Please use the #VoteOutNukes hash tag when using social media to campaign in your area.
The May 2017 edition of CND’s Campaign magazine launches the election campaign this week and the magazine has all the information you need to make nuclear issues central to the debate. http://www.cnduk.org/cnd-media/campaign-magazine

THE UN GLOBAL BAN TALKS
On June 15th, the United Nations will begin the second round of its negotiations to draw up a treaty banning all nuclear weapons.
We have until that date to make sure the UK drops its boycott of these historic talks.
With your help we can do it – please donate today: contact Scottish CND http://www.banthebomb.org
Also don’t forget the SCND Working party: next meeting 10th May in the SCND office. Minutes of previous meeting available.
The international community is counting on us, as the UK’s largest anti-nuclear organisation, to make sure that happens.

More information: http://www.reachingcriticalwill.org and http://uk.icanw.org/campaign/partner-organizations/
Also we have an information collection from David Lowry (available on request)

0. Next Edinburgh Stop the War Meeting, Monday 15th May 7.30pm at the Quaker Meeting House, 7 Victoria Terrace.  Hope to see you there.We’ll be planning for activities over the next few weeks, including Syria and the Middle East, the Trump visit, the Global Nuclear ban talks and our presence at summer festivals (all in context of current election).  If you haven’t been to one of these meetings before you will be very welcome. A general leaflet and our petition on arms sales to Saudia Arabia and the impact on Yemen can both be downloaded from the resources page at www.scotlandstopwar.org
1. Legacies of Resistance to the First World War Workers Education Association Adult Education Classes Starting Edinburgh: South Bridge Resource Centre, Infirmary Street, Edinburgh, EH1 1LT. Starting Wednesday 10th May for eight weeks. 12.30pm – 2.30pm.
2. Conscientious Objectors Day Vigil 5 – 6pm. Monday 15 May The Mound, by the National Gallery of Scotland
3.Yemen: the Forgotten People 18 May, from 5:00 – 8:30pm. Edinburgh Centre for Carbon Innovation High School Yards Infirmary Street Edinburgh EH1 1LZ Kate from the Edinburgh CAAT group will be speaking at this UN House event on Yemen on Thursday 18 May, alongside some incredible Yemeni analysts https://www.eventbrite.co.uk/e/yemen-the-forgotten-people-tickets-33898378964In addition to the panel discussion, they’ll be showing a short documentary by Yemeni filmmaker Nawal AlMaghafi, as well as exhibit photos by Yemeni artist Thana Faroq, so it should be a really interesting event.                                                                              4.Challenging Military Recruitment of Youth Saturday 27 May. 11am – 1pm.
All invited to arrive early (10:30am) for a cup of tea and networking time. Two short Films, Speakers and Discussion Screening “Engage” Forces Watch film about Cadets in schools and Woodcraft Folk campaign against it.
Screening Quaker film “The Unseen March” that outlines the UK governments concerted campaign to improve its image – from Armed Forces Day events annually to the expansion of the Cadets programmes and Speakers.
5.“Say NO To Militarism Stall on Armed Forces Day” stall in Glasgow on Armed Forces Day. 11am George Square. There are Armed Forces Day acitivities planned for George Square that day too. That event is at:https://www.facebook.com/events/620742864791795/
6.The next meeting of Don’t Bank on the Bomb is 29 June at 1:30pm at the P&J Centre in Edinbugh. Minutes of DBOTB Meeting 4 may 2017 are available
7.In Australia they continue:For the latest news: https://walkingforcountry.
8.Jaroslav Hasek’s masterpiece Good Soldier Schwejkis as relevant today as it was in 1923 and the Good Soldier is now at Sands Films to star in a new live stage adaptation. It is a comedy, a political comedy and its subject is the absurdity of war. The production is going ahead, costumes are being made, sets are being built and the cast is chosen. In many respects this project is a protest and we invite everyone to join us.