Skip to content
Dave will be just back from the Preparatory Committee for the 2020 Review Conference of the Parties to the Treaty on the Non-Proliferation of Nuclear Weapons (NPT) is scheduled to hold its second session from 23 April to 4 May 2018 at the United Nations Office in Geneva. This will be the second of three planned sessions that will be held prior to the 2020 Review Conference.
So, on Monday, representatives from almost all states, including the UK, will meet in Geneva to discuss the future of the treaty. In 2018 we mark the 50th anniversary of the NPT, a milestone in global attempts to get rid of nuclear weapons.
Kate Hudson will also be travelling to Geneva. This is a chance to directly challenge the UK government to disarm its nuclear weapons.

Along with Parliamentary CND Chair Caroline Lucas MP and other senior politicians, she’ll be demanding to see concrete plans from the government for disarming the UK’s nuclear weapons.

Very related to the above: Over the last two weeks we have been hearing talk of ‘world war three’, as war drums beat for military escalation in Syria. CND opposes this course of action which will only increase the likelihood of this terrible conflict spilling over into the wider Middle East and potentially beyond that.There can be no justification for chemical weapons attacks, or for despicable bombing that targets civilians, but further air strikes will only extend the appalling suffering of the people of Syria.Peace campaigners responded to the airstrikes conducted by the US, UK and France early this morning. Kate Hudson, CND General Secretary, said:

“We strongly condemn these air strikes on Syria, which are in defiance of international law. They will only increase the likelihood of this terrible conflict spilling over into the wider Middle East and potentially beyond that. “We also condemn Theresa May’s decision to bypass parliament which demonstrates a contempt for the necessary democratic process. She has also disregarded public opinion in launching these strikes; polls indicate that only 22% of the population support this bombing campaign.CND works for ‘the prevention and cessation of wars in which nuclear weapons may be used’ and there can be no clearer example of such a situation than that which we are currently facing. Diplomatic and political solutions must be sought.Take action: Protest Watch out for more events in Edinburgh               Take action: Contact your MP Please ask your MP to oppose military plans for escalation of the war in Syria. Write to your MP 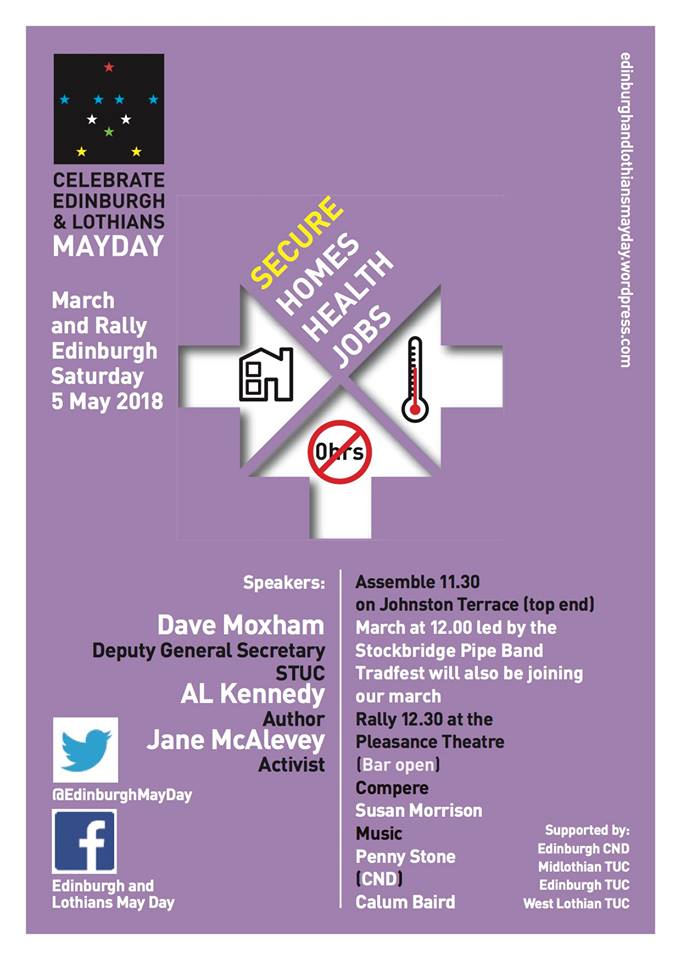 The Edinburgh CND supported May Day march and rally will take place on Saturday 5th May. Assemble (top of) Johnston Terrace 11.30 for 12 noon. March behind the Edinburgh CND banner and join us for the rally in the Pleasance Theatre from 12.30.

1.UNFOLD ZERO,  the Basel Peace Office, International Peace Bureau, PNND, World Future Council and other international organizations have launched the new online platform Move the Nuclear Weapons Money.
The platform is part of a global campaign to: cut nuclear weapons budgets; encourage divestment from companies manufacturing nuclear weapons and their delivery systems; reallocate these budgets and investments to meet economic, social and environmental need – such as ending poverty, protecting the climate, supporting renewable energy, creating jobs, and providing adequate healthcare, housing and education for all.                                             Help count the nuclear weapons money: Join campaigners between May 10-16 as they count ($100 million per minute, $6 billion per hour, $146 billion per day for seven days). While counting they will highlight economic, social and environmental areas in which this money could instead be invested. Already they have parliamentarians, civil society leaders, artists, sports stars, musicians, activists, religious leaders, youth, war veterans and others signed up to count the money for 20-30 minutes each. Click here to sign-up as a money counter. Move the Nuclear Weapons Money held a press conference at the United Nations on March 28, 2018 to launch our new online platform and announce Count the Nuclear Weapons Money.  At the press conference they also promoted the UN High-Level Conference on Nuclear Disarmament and released an open letter to the leaders of USA, South Korea and North Korea signed by more than 100 US civil society groups expressing support for the upcoming inter-Korean summit in April and the US-DPRK summit in May.

See Amid growing nuclear dangers, experts highlight importance of the UN High-Level Conference on Nuclear Disarmament
1.A) Peace campaigners from the United States and around the world are joining forces to encourage candidates in the US mid-term elections to commit to nuclear disarmament, improved firearms regulation, climate protection, international diplomacy and the cutting of military budgets to release resources for areas of human and environmental need.
———————————–
2. The next ICAN Scottish Roundtable will be Wednesday, 30 May at 7.00pm. The Scottish ICAN partners and their friends will be hosted by UN House Scotland. To learn more about our work, please see our website at www.unhscotland.org.uk.
One of the things discussed will be Scottish CND’s “Nae Nukes” peace rally on 22 September 2018 at Faslane nuclear base in support of the TPNW. More information is available on our Scottish ICAN website, nuclearban.scot or from SCND. Also on nuclearban.scot, there is news and a PDF to download about parliamentary lobbying; our recent letter from ICAN partners across the UK to the Secretary of State about the upcoming negotiations in Geneva on the Non-Proliferation Treaty will be going up sometime today as well.
——————————-
3. In just two weeks, the Peace and Justice Centre have raised over £1,000 to support their conflict resolution ongoing project. They need to raise just £750 more to reach our goal and to help sustain this work this term (see previous post)
——————————
4. STOP PRESS: UNFOLD ZERO understands that a decision will be made at the United Nations tomorrow (25th) to postpone the UN High Level Conference on Nuclear Disarmament which was scheduled to take place in New York from May 14-16, 2018.New dates for the conference have not been set. The Non-Aligned Movement, which initiated the proposal for a UN High-Level Conference, is continuing consultations with UN member States in order to find a suitable date.
——————————————-
5. Towards A Defence and Security Strategy for an Independent Scotland
SATURDAY 19TH MAY 2018 ALL WELCOME 10:30am to 4:30pm Albert Halls, Lesser Hall, Dumbarton Road, Stirling, FK8 2QL
—————————–
6. Australian news: http://www.walkingforcountry.com
—————————
7. Los Alamos Bulletins   246 and 247   http://www.lasg.org/
—————————-
8. www.nonlethalsecurityforpeace.com : an occasional newsletter