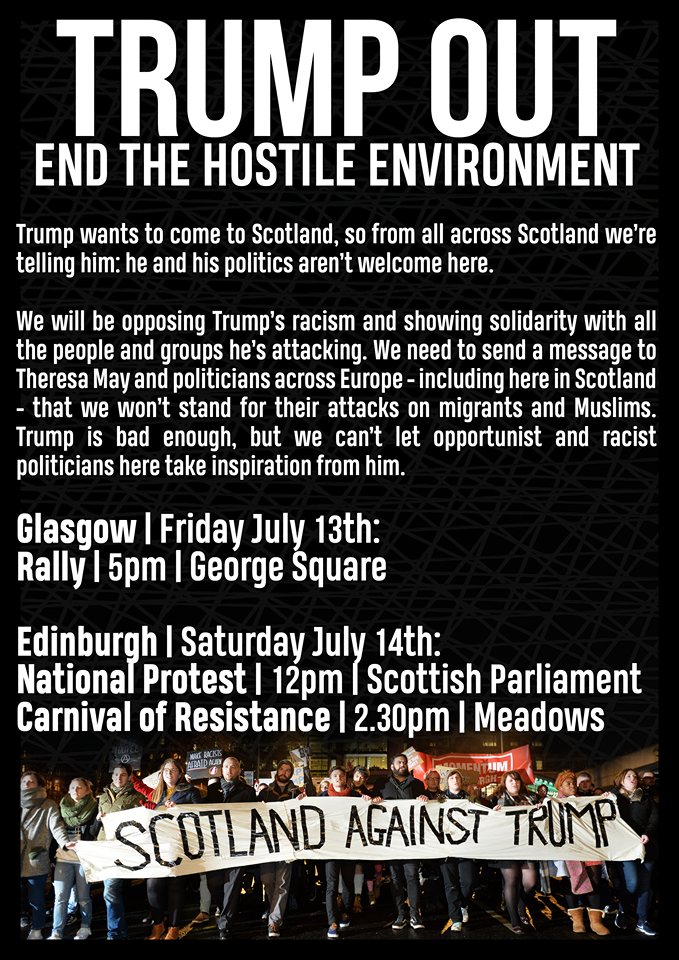 There is also a big demo planned for London on the Friday.
Statement from Scottish CND:
There is no surprise that we are offering support to the Anti Trump rally organised by STUC at the end of this week. Nuclear weapons in Trump’s hands has been a major concern for all our members and supporters. Scottish CND will have a stall and a speaker at the Glasgow rally and a presence at the national protest in Edinburgh. Glasgow CND and Edinburgh CND are also supporting these demonstrations. Please join us if you can.
While some steps in the right direction have been made by Trump and his administration (North Korea summit) we have to keep in mind that many of his statements and actions are contributing to moving us closer to nuclear war.
For example inflammatory posts on Twitter like having a nuclear button which is much bigger and more powerful than North Korea’s to pushing withdrawal from the Iran Deal. In these difficult times of conflict we call for world leaders to act with diplomacy and use tactful words and language to help with the peace making in our modern world . Moreover, we call nuclear weapons states to align to the rest of the countries who reject nuclear weapons and sign and ratify the new Treaty on the Prohibition of Nuclear Weapons.
In London, Kate Hudson, CND General Secretary, said:
“Trump is the President who’s torn up the Iran nuclear deal, he’s threatened to kill millions with nuclear weapons in North Korea, and he’s unveiled new ‘usable’ nukes, increasing the possibility of nuclear war.
“When he dropped the ‘mother of all bombs’ on Afghanistan it signaled that he won’t stop with threats. We have to recognise that a nuclear bomb could be next.
“His visit to Britain comes after an appearance at the NATO summit in Brussels where he is calling on member states to spend even more money on nuclear weapons and war.
“It’s crucial that Trump’s visit is defined not by Theresa May’s open arms, but by opposition to his dangerous policies. That’s why thousands of us will take to the streets in central London on Friday to make that message loud and clear.”
There is no denying the impact that US President Donald Trump has had on the international stage. His visit to the UK this week is expected to attract tens of thousands of protesters, furious at his policies and attitudes. CND will be joining the Together Against Trump demonstration in central London, as well as supporting dozens of protests across the country. Read about why we’re protesting in this month’s Campaign magazine.As well as tearing up the Iran nuclear deal. Trump threatened to kill millions with US nukes in North Korea. He recently announced new ‘usable’ nukes to expand the possibility of nuclear warfare, and he’s visiting Brussels this month to demand that NATO members spend even more on nuclear weapons and war.
One minute Trump’s posing as the peace broker, the next minute he’s preparing for war. His presidency threatens the security of the world and it’s time for our movement to confront him.
This month’s edition of Campaign also looks at Trump’s summit with North Korean leader Kim Jong-un. Will this bring de-nuclearisation and peace to the peninsula?
Read Campaign: July edition
Download Campaign: July edition
Other News:
1. Latest Peace and Justice Centre News: Peace and Justice News – Peace and Justice
The P and J will be holding their weekly Crane Making at the Carnival against Trump on 14th
————-
2. Statement from the Basle Peace Office:

4. News from Beyond Nuclear: Golden Misabiko cares about human rights. That’s why he’s fought to stop uranium mines in Congo. His government imprisoned and tortured him and tried to poison him. He lives in exile. But still he fights on. Despite the apparent truce after the US summit with North Korea, nuclear super powers still talk about fighting nuclear wars. Shouldn’t we be more worried — and engaged — asks Rashmee Roshan Lall? Have you got a great story? Tell us about it!                                                               They aren’t above serving up radioactive pizza to make a point, but this Cumbrian couple have spent decades sounding the alarm about the dangers of the English reprocessing plant. At the other end of the nuclear fuel chain, uranium miners in Niger have suffered previously unknown diseases, contaminated water and radioactive dust blowing across their desert homeland. Beyond Nuclear International
—————–

—————–
6. News from Australia http://www.walkingforcountry.com
—————-
7. News from UK Parliament: The government’s part-aid funded Conflict, Stability and Security Fund, worth over £1bn and growing, is being used finance a M&C Saatchi PR campaign to support IMF-demanded cuts in Tunisia. Austerity and associated unemployment played a role in sparking the 2011 Arab Spring in Tunisia and is also now making the country vulnerable to civil unrest once again.

Tweet of Guardian story here: https://twitter.com/lloyd_rm/status/1014124294522265600Astonishingly, the independent aid watchdog ICAI has said that that due to gaps in monitoring evaluation and learning, ICAI cannot be sure that CSSF programming is not risking aggravating the very conflicts it seeks to address – ICAI 2018 report, paras 4.77, 4.79.