The first meeting of 2020 will be on Tuesday 7th January 6pm in the Peace and Justice Centre, Epworth Halls

14/12: What the election means for CND: There is no doubt the extra Conservative MPs in England and Wales – and the loss of some anti-Trident Labour MPs – make a difficult parliamentary terrain for change in nuclear policy.

But the election results shouldn’t be interpreted as reflecting a growing enthusiasm for nuclear weapons. A recent article in The Times acknowledged that polling data showed falling support for Trident. Another poll commissioned during the election by the same newspaper asked whether the British prime minister should be willing to authorise the use of nuclear weapons. A minority said the PM should – 57% said they shouldn’t or they didn’t know.

During the general election, the Lib Dem leader Jo Swinson was heavily criticised for her glib ‘yes’ response to whether she would press the nuclear button. A CND video which highlighted her inappropriate reply was viewed over 1 million times and Swinson went on to lose her seat to a candidate from the anti-Trident Scottish National Party.
Scotland – an increased anti-nuclear majority
The SNP gained an extra 13 seats, bringing their total to 48 out of 59 Scottish constituencies. Party leader Nicola Sturgeon spoke very clearly and passionately against nuclear weapons throughout the election, which won her plaudits on social media and big rounds of applause in the leaders’ debates. SNP MPs will be a powerful voice for nuclear disarmament in Westminster.
The role of our movement
We thank everyone who lobbied the election candidates – we received hundreds of replies. The legacy of this work is the relationships we have forged with candidates who are now MPs – we will now invite them to campaign with us in Parliamentary CND. Quite a number of candidates who weren’t elected have become members of CND and plan to work with us from their localities.
Nevertheless, the Conservative majority in Westminster will leave many feeling pessimistic. Our movement has a crucial role to play in turning around the political situation on vital existential questions. We must give voice to the growing millions who oppose nuclear weapons. We must strengthen our links and solidarity with other campaigning organisations and movements who strive to build a better, just, more peaceful world.
Our vision of a world without nuclear weapons is needed now more than ever – as is our experience and commitment to change. Success will not come from waiting and hoping that the next election will deliver something better. It will come from our continuing work – and its intensification which we begin today – building together the kind of world the majority of humanity wants to see. 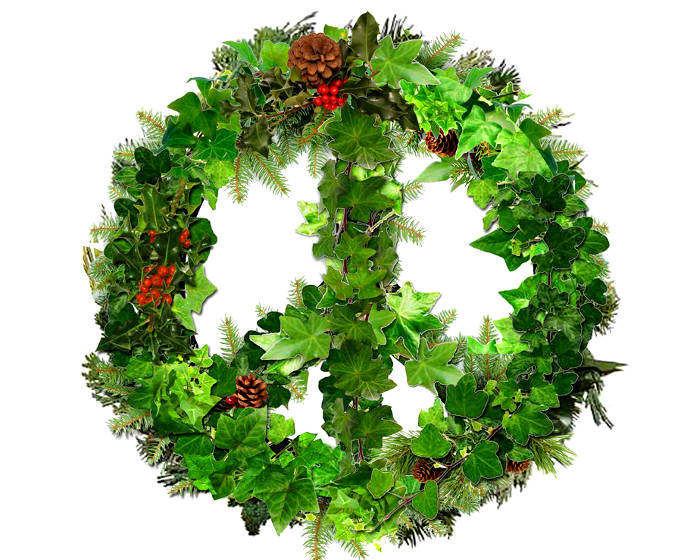 1. Our last organised event of 2019 will be on Saturday 14th December: 1230 Leafleting at the East End of Princes Street.Please join us.

—————————–
2. Two days before that (12th) will be the UK General Election. Donald Trump has been campaigning for Boris Johnson in the G.E., he has also been once again demanding that NATO member states increase their military spending to pay for US military projects and ambitions. This is an unacceptable undermining of national sovereignty over public spending decisions.
Jo Swinson (Liberal Democrats) said politicians unwilling to use nuclear weapons were a threat to national security and  on the ITV leaders’ debates she confirmed, for the second time, she’s ready to press the nuclear button.
On Labour’s manifesto Kate Hudson, CND general secretary, said:
(it) ‘is a missed opportunity to address the growing threat of nuclear war, a threat as serious and urgent as the climate crisis. The manifesto commits a future Labour government to the old cold war status quo on nuclear weapons. Replacing the Trident submarines – at a cost of at least £205 billion -means Britain possessing nuclear weapons for many decades to come, weapons which are already rendered obsolete as a result of technological advances, new forms of warfare and changing security threats’
CNDs updated 2-minute lobby tool can be used to email the candidates in your constituency about their views on Trident and nuclear disarmament. Please forward their responses to parliamentarycnd@gmail.com.  The information is published on the #VoteOutNukes database  and will help the public identify candidates who support peace and disarmament.
3. SCND held their AGM on 16th November. It was a very lively and interesting meeting. They have a host of new Executive Committee members and office bearers with a range of experience. The AGM minute and record of passed resolutions are available on the website, an introduction to our new Executive Committee will also be on there soon. They have also issued their end of year summary including reminders that they released four short reports on everything from nuclear power to the global alliances that play political monopoly with our planet. You can read each of them here.  and  Scotland: A Peace of History on tour across Scotland.
More is covered in the Autumn/Winter edition of Nuclear Free Scotland which will be mailed out to our members this week, in the mean time please read the Spring/Summer edition which is available via this link.
December email newsletter also available 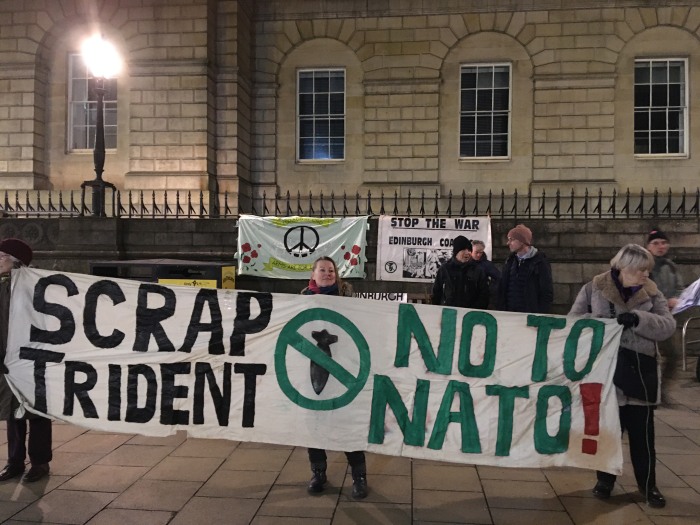 4. There are a series of protests organised across Scotland to oppose the NATO Heads of State summit (including in Edinburgh). Thousands also marched in London and a counter summit was held with activists from across Europe and beyond  Further details including the full agenda are available online.CND says: The good news is that opposition to NATO is growing. In 2017, polls showed that 27% were ambivalent or opposed to the bloc. By 2019, that number has risen to 41%. Those who strongly support NATO has fallen from 42% to 25%. SCND adds Opposition to NATO is growing, a 2017 YouGov poll showed that 73% of the British public approved of NATO member and a recent 2019 poll showed that this number has since fallen to 59%. Within two years there was a fourteen percent drop in support for NATO, despite the media giving little to no coverage about the war policies made by the world’s largest nuclear-armed military alliance at these Heads of State summits. With your help to spread the message of peace and disarmament without NATO we can get that percentage of approval even lower.
But there is much more work to be done. One of the frustrating aspects of the NATO summit was the complete absence of discussion and debate about the bloc in the media. It is still assumed by many – including by the main political parties – that NATO is a good thing.
——————————
5. Parliamentarians for Non-proliferation and nuclear disarmament: there will be three exciting PNND events in early 2020: Climate, peace and security: From youth voices to policy action in Basel, Switzerland on January 9-10; the PyeongChang Peace Forum in South Korea on February 9-11 and the PNND 2020 Global Assembly in Seoul,  South Korea on April 23-24.
————————-
6. Beyond Nuclear International: https://beyondnuclearinternational.org:
6.1. This week we question the sanity of the human species — specifically our insistence on punishing and imprisoning those whose peaceful actions are designed only to prevent our own annihilation. John LaForge reminds us of the powerful words articulated by his sentencing judge in 1984, who saw the use of nuclear weapons as far more heinous than the protest of them. And Linda Pentz Gunter wonders why the existential threat of nuclear war is never mentioned on the campaign trail and elsewhere, even as we — finally — recognize climate change as a global emergency.
6.2. What the US left behind in Iraq, say scientists looking at the health effects, continues to ruin the country’s environment and poison its people. That includes thorium — a decay product of depleted uranium — found in the hair of children born to exposed mothers. But after leaving Iraq in 2011, says David Masciotra, the US acts like nothing ever happened. Those who opposed the Iraq war — and many others — deserve a national monument, argues Michael Knox. Why do we honour soldiers and veterans and not also those who strive for alternatives to war?                       +++++6.3When polled, Americans say the Green New Deal is too expensive. But 75% of them have barely heard of it. Is the media negligent in giving the climate crisis the urgency and coverage it deserves? What price is too high for our future? Linda Pentz Gunter asks these questions and more. An even higher price could be paid by all of us if India and Pakistan wage a nuclear war, says a new study. Global temperatures could drop between 3.5-9 degrees and worldwide famine would ensue. Daniel Stain reports.
—————————–
7. NuClear News No.120 December 2019 is now available for downloading here.
www.no2nuclearpower.org.uk/wp/wp-content/uploads/2019/12/NuClearNewsNo120.pdf

——————————
9. Nuclear Free Local Authorities: A report which is now also on the NFLA website (and shortly on the Mayors for Peace website) outlines the recent Mayors for Peace Executive Conference and the founding meeting of the European Chapter. The report also outlines some other relevant initiatives. http://www.nuclearpolicy.info – includes links to NFLA Facebook and Twitter pages
Mayors for Peace Website: http://www.mayorsforpeace.org
——————————-
10. Los Alamos Study Group Bulletin 264: LANL expansion, new mailing list, staff position available, news and views you can use http://www.lasg.org/
——————————–
11. Dovetails Next event is at the Scotia Bar on 10th December 7pm.
112 – 114 Stockwell St, Glasgow G1 4LW