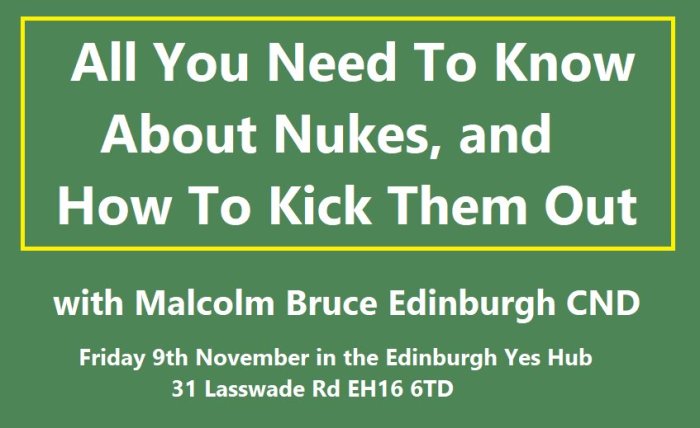 EVENTS:
1. Tuesday 6th November:  We will be having our usual organising meeting at 6pm in the Peace and Justice Centre.
2. White Poppy Sales :1pm Thursday 25th October at the University of Edinburgh (George Square/Appleton Tower junction).
5pm Wednesday 31st Octoberat the east end of Princes Street
5pm Thursday 8th Novemberat the east end of Princes Street
Poppies will also be on sale on Saturdays 1pm to 2pm as part of the Women in Black Vigil at the east end of Princes Street and at the Women’s STUC in Dundee 29th and 30th October
3. Scottish CND AGM is on 10th November 2018 at Renfield St Stephen’s Centre, Glasgow, G2 4JP. Registration from 10:00am see http://www.banthebomb.org for more details
4. Sunday 11th November: events to commemorate all those who helped bring about the end of the 1914-18 War including in Edinburgh and London
5. SAT, 17 NOV AT 10:00 (all day) Just Transitions Conference: Employment, Energy, Environment Charteris Centre, 138-140 The Pleasance, Edinburgh EH8 9RR organised by Scot.E3
6. Tuesday 20 November, 6.30pm – 9.30pm Memorial to Conscientious Objectors Fundraiser: see News section no 4
————————————————————————————–
NEWS:
STOP Press 24/11: 1. Anti-Trident protestors have blockaded all entrances at one of Britain’s nuclear weapons factories, AWE Burghfield in West Berkshire. The direct action has halted traffic to and from the site this morning. The protest is highlighting the role AWE Burghfield plays in the maintenance and replacement of Trident, Britain’s nuclear weapons system.The Burghfield bomb factory, administered by the Atomic Weapons Establishment, builds and maintains nuclear warheads.The Trident Plougshares activists have blocked access to the site with a car with two people locked to it at one point and with a line of people with their arms in lock-on tubes at another.
Separately, campaigners from local CND group Hereford Peace Council will today travel to Parliament on a ‘peace train’, bringing with them petitions from thousands of supporters who want the government to get rid of its nuclear weapons and join the UN’s Treaty on the Prohibition of Nuclear Weapons.

2. Just days after President Trump announced US withdrawal from the INF Treaty, NATO is to launch its biggest military exercises since the Cold War tomorrow, lasting until November 7th. Taking place in Norway, these exercises will simulate the collective response of NATO to an imagined attack on an allied partner, as outlined in Article 5 of the NATO treaty. The UK has committed more than 250 vehicles and 500 soldiers to this exercise. CND General Secretary Kate Hudson said:‘While the foe in this imagined scenario is claimed to be fictitious, the decision to launch these drills in Norway, a country which shares an Arctic border with Russia, sends a provocative message of NATO’s intended dominance in the region to Russia.

——-
1. President Trump has announced plans to withdraw the US from the Intermediate-Range Nuclear Forces Treaty (INF). This is a hugely destabilising development that threatens global and – in particular – European security.

Signed by Reagan and Gorbachev in 1987, the treaty banned ground-launched nuclear missiles and led to nearly 2,700 missiles being eliminated. It meant that the cruise missiles sited at Greenham and Molesworth were removed and countless more across Europe. Tearing up the INF Treaty will end the restraints on nuclear arsenals achieved in the 1980s. It will open the way for the return of cruise-type missiles to Europe: they have only one purpose – that a US nuclear war against Russia will be fought in Europe. We understood that in the 1980s and we mobilised against it – and the INF Treaty was in large part the result of that. Hundreds of thousands protested against cruise missiles; the iconic Greenham peace camp was part of that movement. Kate Hudson, CND general secretary, said: “This is a reckless move by Trump. Tearing up the Intermediate-Range Nuclear Forces Treaty will mark the end of the restraints on nuclear arsenals achieved in the 1980s. The danger is that we will see spiralling arsenals on a Cold War scale.  “We utterly condemn the Defence Secretary’s comment that the British government’s support for the US administration at this time is ‘absolutely resolute’. Britain should be voicing strong opposition to this dangerous move rather than fanning the flames that can lead to nuclear war.

2. CND is also delighted to launch its new collaboration with Britain’s foremost political artist Peter Kennard: a campaign T-shirt based on Peter’s iconic Crushed Missile artwork. As Peter explains: “World leaders in their macho madness announce that they would press the nuclear button. We have to campaign to crush and destroy all nuclear weapons before they do press the button and destroy us”.
3. Politicians, academics and activists gathered in Bristol 20th and 21st October for a two-day CND conference on how to achieve a world free of nuclear weapons and nuclear power. see http://www.cnduk.org  and will be gathering Saturday, 17 November 2018 at 12:00
Join the CND banner outside the BBC on Great Portland Street
4. Memorial to Conscientious Objectors;

Click here to view the video about the wonderful design that will be noticeably different and represent a respectful counterpoint to all the war memorials nearby. Share the Crowdfunder page and help spread the word so lots of people will be able to help.

The session opened with statements from the UN High Representative on Disarmament Affairs, the Head of the Non-Aligned Movement and representatives of many UN member countries.

7. ICAN: latest report of activity with the UK and Ireland Mayors, Provosts and Leaders for Peace – the constituent Chapter of the Mayors for Peace organisation available on request. Meanwhile countries and regions continue to support the Un Treaty.
8. Next meeting of SCND Timeline exhibition group is on Monday 29th of Oct, 6.30 pm – in SCND office (see earlier posts). STOP PRESS: MINUTES NOW AVAILABLE

9. 10th November, CAN BE WATCHED LIVE: Future Wars: The Impact of New Technologies conference will take place at Birkbeck College in London. It will be a fascinating event, with a host of experts laying out the new threats that we need to organise against and face down — including the militarisation of space, cyber warfare, hacking, and killer robots and drones. But we’ll also discuss new tech ethics and alternative visions of security. Following last year’s CND Council decision to hold it, Future Wars is shaping up to be an essential event for peace campaigners, and we really look forward to seeing you there. You can register online on Eventbrite. Extra Comment: CND condemns the Defence Secretary’s support for Trump’s action and calls on our government to express strong opposition to this dangerous move. This week an urgent question was asked in Parliament and EDM 1744 was tabled on this crucial issue. Now we’re following this up and mobilising MPs to press the government to respond. Can you help us?
Contact your MP today

10. The Walkatjurra Walkabout is already talking about next years walk and the many other projects and events coming up to support the court case to stop Yeelirrie and to keep Western Australian free from uranium mining..  There may be a few changes next year and one of them may be that we walk from Leonora to Yeelirrie.  We will update you more as plans unfold.

11. Why is Saudi Arabia under fire over Jamal Khashoggi, but not Yemen?