STOP PRESS 18/11 There are just 25 days to go until the General Election.

21/11: Anti-nuclear campaigners have responded to Labour’s 2019 manifesto.
Kate Hudson, CND general secretary, said: “Labour’s manifesto is a missed opportunity to address the growing threat of nuclear war, a threat as serious and urgent as the climate crisis.
————————–
EVENTS:
1. Thursday November 14th: The planned NFLA meeting on Nov 14 in Motherwell has now been CANCELLED due to General Election purdah rules on local authority meetings. However there will be a meeting at the University of Edinburgh on at 3 pm in room LG 11 in the basement teaching area that you enter from George Square or the basement of David Hume Tower.  The meeting is to discuss the alarming new ONR evidence on the poor state of the reactors at Hunterston B. These were first revealed in newspaper articles in the Ferret on October 17 (see https://theferret.scot/hunterston-graphite-debris-nuclear/).
Ian Fairlie has kindly agreed to speak to the Edinburgh meeting and to answer questions. We shall also be discussing possible demands for the immediate distribution of prophylactic iodate tablets by EDF and the publication of 30 km evacuation zones near Hunterston and Torness.
———————-
2. Saturday 16th November: 2.1 Scottish CND AGM at the Edinburgh Quaker Meeting House (7 Victoria Street, Edinburgh, EH1 2JL) from 10:00am with special guest performer Rachel Sermanni and Scottish Youth Climate Strikers Kenneth McIvor and Grace Quinn. All welcome. Further information VIA THIS LINK
2.2 Evening: David  Rovics concert: Highly recommended. ‏‎David Rovics in concert‎‏
———————
3. Tuesday 19 Nov. NAE CASH FOR NUKES! Launch of the new Don’t Bank on the Bomb Scotland 2019 report. 6 for 6.30-8.30pm Edinburgh University Law School, Quad Teaching Room G.158, Old College, South Bridge EH8 9YL
Speakers: Linda Pearson, Don’t Bank on the Bomb Scotland.
Audrey Doig, Renfrewshire Councillor, NFLA Scotland Co-convenor.
John Finnie, Green Party MSP for the Highlands and Islands.
Please book via https://dbotb19nov.eventbrite.co.uk and
Share NAE CASH FOR NUKES! How can we Divest? 6pm Tues 19 Nov Old College EH8 9YL
Note: Edinburgh Council hasn’t passed a resolution on nuclear weapons divestment, although we hope it will eventually, as it has passed the ICAN cities appeal resolution. Midlothian Council has passed a divestment resolution. The complete list of Scottish councils that have passed a divestment resolution is on this page: https://nukedivestmentscotland.org/local-authority-divestment-resolutions/
————————
4. Thursday 28 November – Sunday 1 December. Conscience International conference. Quaker Meeting House, Edinburgh.
Speaker Thurs 28 Nov. Vijay Mehta on the idea of a Minister for Peace.
Full programme at: conscienceonline.org.uk/international-conference-2019/
————————–

On Tuesday 3rd December, the Queen will be hosting a reception for NATO leaders at Buckingham Palace and protesters from a wide range of campaigning organisations will be there to greet the delegation. Crowds will be assembling in Trafalgar Square from 4pm where there will be speeches and music before setting off towards Buckingham Palace.
There will be supporting gatherings in Scotland including in Edinburgh 5.30 pm East End of Princes Street: https://www.facebook.com/events/1307144789464996/

8. Thursday 12th December GENERAL ELECTION. CND says: Now is the time to put nuclear weapons on the public agenda. So CND is taking action to make Trident an unignorable issue at this election and is launching a major campaign to lobby parliamentary candidates, to tell them that their views on nuclear weapons matter and can affect how we vote. The majority of us don’t want to see £205 billion wasted on replacing Trident – and we want newly elected MPs to oppose it. It’s vital that the peace and anti-war movements are mobilised to demand an end to what John Pilger dubs an ‘American invention designed to impose American power on Europe.’

Scottish CND adds: What does a general election mean for those of us who want nuclear disarmament? It is a chance to check out the position of all candidates before we decide who we vote for. Let’s make sure that Scotland only returns MPs that firmly OPPOSE nuclear weapons and support the 2017 UN Treaty on the Prohibition of Nuclear Weapons that will ban them globally.REGISTER TO VOTE: A lot of people, especially young people, are not registered to vote because they may have just come of age or moved house since the last election. Check your own eligibility and encourage others. You can register to vote VIA THIS LINK. Those working, or otherwise away from home, can get a postal vote. Applications for postal votes must be received at least eleven working days before the election. Apply for a postal vote VIA THIS LINK. 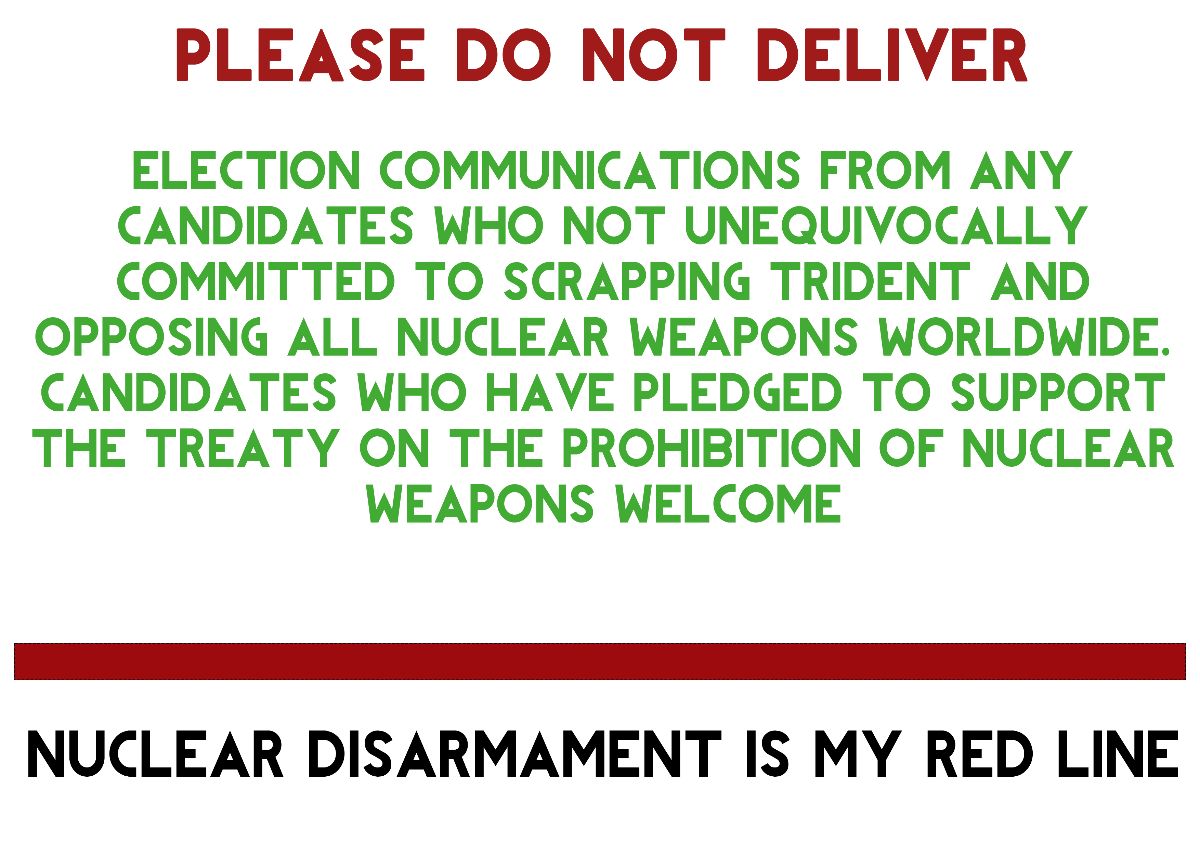